I have always wanted to fly on an inaugural international flight, especially after hearing all the stories my buddy Dave has told me about his inaugural flights. So while planning another Euro Trip for the Spring of 2015 I heard about Delta starting up nonstop service from Salt Lake City (SLC) to Amsterdam (AMS) on May 1st 2015.

Right away the wheels started turning and I knew this was too good to pass up. After looking into the flight I began planning Euro Trip ’15. My buddy Dave decided he too needed to take part in this inaugural flight and made plans to join me at SLC for the flight over to AMS. I cashed in 112,500 Skymiles and $84.60 in taxes for my two flights; SLC-AMS over and CDG-SLC back.

A few days before the flight I found out that one of the flight attendants knows my mother and told her she would look after Dave and I. Everything was starting to fall right into place for my eighth trip over to Europe.

Dave and I headed out to Salt Lake International Airport very early making sure not to miss any festivities Delta might have for this inaugural flight. Turns out we were the first ones at the gate and things were just getting set up. 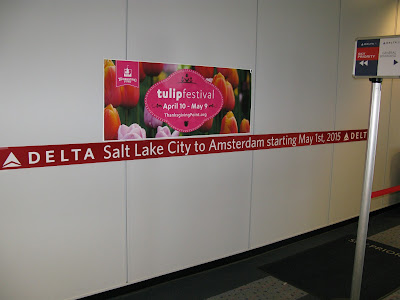 Soon everything was all setup and more Delta people started showing up. I overheard one of the more executive looking ones say that they don’t do as much for the inaugural flights these days. I was still appreciative of the effort they did make for this inaugural flight. Dave and I grabbed a few cookies and some water along with one of the commemorative pins they were giving out. Surprisingly, many of the people on this flight had no idea what was going on and that they were going to be on the inaugural SLC-AMS flight.

Cynthia took great care of us throughout the flight. Always a bonus knowing a member of the flight crew.

Right before pushback there was an announcement from the flight deck welcoming everyone to the inaugural Salt Lake City to Amsterdam flight, and with that we were off.

It was fun being part of the inaugural Delta international flight; very much a feather in my travel cap. Would I go out of my way for another inaugural flight? Probably not, but there is an inaugural Salt Lake City to London Heathrow (LHR) coming up May 1 2016.